Our endorsement is based upon his opposition to the SAFE Act and willingness to stand up for 2nd Amendment civil rights in front of a national audience on Sean Hannity’s show.

NYSRPA encourages all gun owners and concerned citizens to support Sheriff Smith in both the primary and general elections.

Proceeds will benefit Honored American Veterans Afield (HAVA), a non-profit organization whose mission is to raise awareness and assist disabled veterans with the healing process through active participation in outdoor sports.

June 27, 2013 (readMedia) — The New York State Rifle & Pistol Association would like to know why New York City taxpayer monies are being used to promote personal political agendas. First, it was discovered that Mayor Bloomberg’s pet project, Mayors Against Illegal Guns (MAIG), is being run on City government servers and administered by City government staff:

Next, it was uncovered that City employee Christopher Kocher, who works as special counsel to the mayor’s office, was sent to Nevada as a representative of MAIG to lobby the Nevada state legislature on Nevada gun control legislation:

In light of these revelations, the NYSRPA has some questions we would like answers to:

June 4, 2013 (readMedia) — Christine Quinn’s nonsensical reaction to the murder of Mark Carson shows how out of touch with reality the Councilwoman is. Her offer of free “self-defense” classes which don’t actually teach self-defense techniques is a perfect example of political correctness run amok.

“New York City Courts have repeatedly ruled police have no obligation to protect citizens from violent attack,” said NYSRPA President Tom King. “All people, whether LGBT or not, are responsible for their own personal safety. No serious discussion of personal safety can take place without including firearms, especially handguns, in the discussion.”

“If Councilwoman Quinn is really concerned about the public’s welfare she needs to offer more than soundbites and symbolism,” King said. “Our Association would be happy to work with the Councilwoman or local civic organizations to offer firearms safety and personal defense classes in the City.”

June 4, 2013 (readMedia) — Ever since Governor Cuomo rammed the SAFE firearms law through the State Legislature, sheriffs around the state have been expressing their dissatisfaction with many of its provisions. One of the standouts in this regard has been Sheriff Tim Howard of Erie County.

With more than 40 years in law enforcement Sheriff Howard knows a thing or two about crime prevention. So when he speaks out about the flaws in the SAFE law, and in favor of New York’s law-abiding gun owners, the Governor and the Legislature should listen carefully. Sheriff Howard advocates that legislators focus their attention on the people who commit gun crimes rather than on guns – a test that the SAFE law fails miserably. In fact, the SAFE law fails so badly that Sheriff Howard has refused to enforce it, arguing that it is unconstitutional. He has even joined three other NYS sheriffs in filing a friend of the court brief in a federal lawsuit seeking to overturn SAFE.

The New York State Rifle & Pistol Association applauds Sheriff Howard’s opposition to the SAFE law, and urges the Governor and Legislature to pay attention to the recommendations of seasoned law enforcement officials.

June 4, 2013 (readMedia) — Ever since Governor Cuomo rammed the SAFE firearms law through the State Legislature, sheriffs around the state – both individually and through the New York State Sheriffs’ Association – have been expressing their dissatisfaction with many of its provisions. One of the standouts in this regard has been Sheriff Christopher J. Moss of Chemung County.

With more than 20 years in law enforcement Sheriff Moss knows a thing or two about crime prevention, and was instrumental in providing an analysis of the new law’s shortcomings to the Governor. But when he and other high-ranking members of the Sheriffs’ Association attended a meeting with Cuomo – supposedly to discuss their concerns about SAFE – they were blindsided. Instead of discussing possible changes to the new law, Moss and the other sheriffs were told to stop speaking publicly about it. It has also been reported that Cuomo threatened to remove sheriffs from office under a rarely-used power granted to the Governor by the State constitution.

The New York State Rifle & Pistol Association applauds Sheriff Moss and the New York State Sheriffs’ Association for attempting to modify the badly flawed SAFE law, and urges the Governor and Legislature to pay attention to the recommendations of seasoned law enforcement officials.

May 28, 2013 (readMedia) — The New York State Rifle & Pistol Association has named State Senator Kathleen Marchione (43rd SD) and Assemblyman Steven McLaughlin (107th AD) its Legislators of the Year. These are difficult times for Second Amendment rights in New York, but these two legislators have stood by New York shooters. Senator Marchione was one of only two Senators to speak on the Senate floor against SAFE during the truncated debates, and is now working to repeal or replace it. Assemblyman McLaughlin has repeatedly stood up for gun rights on the Assembly floor and in the press, calling the Governor’s illegal gun tipline an initiative that “seeks to turn neighbor against neighbor.” The NYSRPA thanks these legislators for supporting New Yorkers’ Second Amendment rights.

May 13, 2013 (readMedia) — The New York State Rifle & Pistol Association Political Victory Fund is pleased to endorse Jeff Gildersleeve for Saratoga County Sheriff. Our endorsement is based upon his background as a firearms instructor who has educated students on safety, responsibility and shooting skills, as well as his strong commitment to the preservation of Second Amendment civil rights. NYSRPA encourages Saratoga County residents to support Gildersleeve in both the primary and general elections.

May 8, 2013 (readMedia) — The arrest of an armed suspect yesterday in Troy highlights the failure of Governor Cuomo’s so-called SAFE Act. According to WTEN, police responded to reports of shots fired and apprehended a suspected in possession of a loaded 9mm handgun with 13 rounds of ammunition in it.

“Clearly the alleged suspect was not deterred by the Governor’s new prohibition on keeping more than seven rounds in magazine,” said NYSRPA President Tom King. “He also was unfazed by the 100+ year old Sullivan Act and it’s prohibition on unlicensed possession of a handgun. This is another clear example of how New York’s gun laws, old and new, do not make the state any safer.”

It being readily apparent that street thugs are not bothered by the SAFE Act, the question becomes why should ordinary, decent citizens be encumbered by it?

“What if this guy were breaking into someone’s house?” King asked. “Legally the homeowner could only have seven rounds available for self-defense, putting him or her at a distinct disadvantage. Who seriously thinks that is good public policy?”

In the months since SAFE’s passage, not once has Governor Cuomo acknowledged the use of firearms for personal protection or how his law negatively impacts it. It is time for the Governor and state legislature to have a serious discussion on the issue and reassess failed gun control policies.

April 16, 2013 (readMedia) — The New York State Rifle & Pistol Association has filed a Motion for Preliminary Injunction in federal court in Buffalo seeking to stop enforcement of various provisions of the Secure Ammunition and Firearms Enforcement Act of 2013. At the same time the Association also filed a Motion for Expedited Hearing on its motion for a preliminary injunction.

The so-called SAFE Act prohibits citizens from exercising their specifically enumerated civil rights under the 2nd Amendment. NYSRPA believes the challenged portions of the Act will fail any applicable standard of review for constitutional rights and that enjoining enforcement is in the public interest.

April 1, 2013 (readMedia) — The New York State Rifle & Pistol Association has filed suit in the U.S. District Court for the Southern District of New York challenging the constitutionality of Title 38 of the Rules of the City of New York.

NYSRPA believes that 38 RCNY infringes upon the Second Amendment by denying the specifically enumerated civil right to possess and carry a firearm for personal defense as well as completely prohibiting residents from practicing safe gun handling at a firearms range or participating in shooting events located outside the borders of the City of New York.

The lawsuit requests a permanent injunction from all agents of the City of New York from enforcing 38 RCNY plus court costs and attorney’s fees.

March 21, 2013 (readMedia) — The New York State Rifle & Pistol Association filed suit today in federal court challenging the constitutionality of the so-called SAFE Act. NYSRPA believes SAFE violates the specifically enumerated right to keep and bear arms by prohibiting the possession of the most common firearms and accessories for self-defense and other lawful purposes.

“The Supreme Court affirmed an individual right to keep and bear arms in the landmark 2008 case of Heller v. District of Columbia and incorporated that decision to the states in the 2010 case of McDonald v. Chicago,” said NYSRPA President Thomas King. “These decisions apply to all New Yorkers. Attempts to deny our citizens the best and most effective tools available for personal protection cannot be tolerated.”

February 18, 2013 (readMedia) — The New York State Rifle & Pistol Association will hold it’s 5th Annual Lobby Day and Rally at the capitol in Albany on Thursday, February 28. All gun owners are welcome. Attendees should make an appointment with their state representatives to meet with them in their offices the morning of the 28th. A rally will take place outside in Capitol Park starting at noon featuring NRA President David Keene. 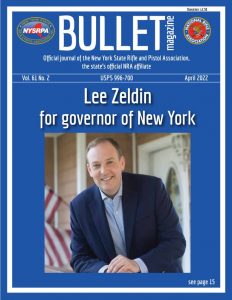